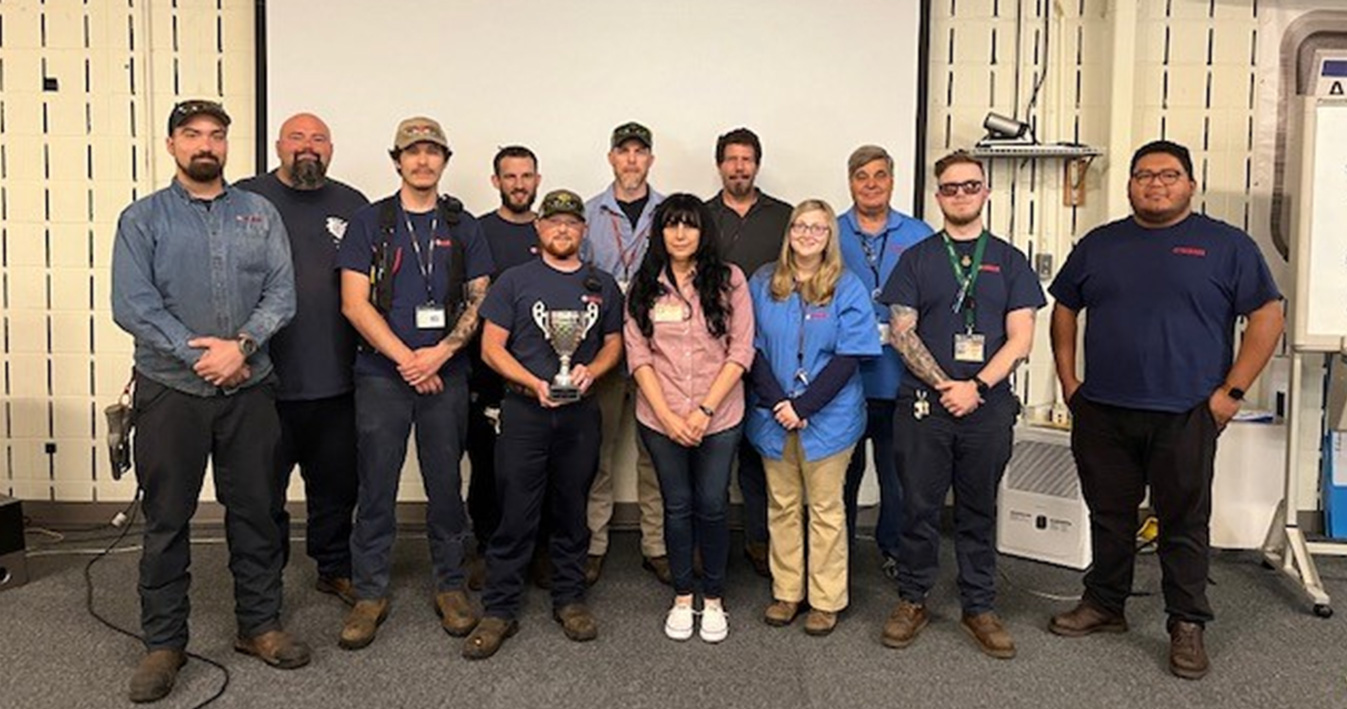 It’s not Nathan’s Famous Hot Dog Eating Contest, NASCAR or the Big Game, but a contest just happened at Yamaha in Newnan. Yamaha’s Small Group Competition is held twice each year and winners were recently named, each member of the team receiving $250. Besides their monetary reward, the employees who participate also get to see their work make a huge difference for their coworkers, end customers and the community.

Twice each year, Yamaha Motor Manufacturing Corporation in Newnan gathers groups of employees in all different departments, pairs them with an engineer, and allows them to solve problems. Using Yamaha’s 8 Step Problem Solving Process, their solutions are implemented and tested right on the assembly line. Then, after their solution has run for at least a month, and data has been collected, they present it to top level management.

Continuous Improvement Engineer Facilitator Bob Jackson, who retires this month after eight years at Yamaha, was assigned to each of the top three winning teams. He said, “These activities help empower associates to make improvements for the company and to their individual areas. During these Small Group activities, it’s not just about doing, it is about teaching others how to take what they have learned back to their own areas. It’s a Win-Win for Yamaha.”

MD Kabir, the Unit Manager for Continuous Improvement, shared that Yamaha has strong leadership at the top, but the Small Group Competition is designed to build leadership at all levels. He said, “We want to go to a perfect place where you turn the pyramid upside down where the bottom is now on the top. They are doing most of the improvement activities. They're pushing the organization to new levels of performance, be it quality, cost, delivery, or safety.”

The team that won first place most recently solved a problem of a part of the golf car assembly line that wasn’t keeping up with the rest of the plant. It was part of the welding line—because the one part of the line couldn’t keep up, it made subsequent parts of the assembly line unable to produce golf cars.

By adjusting productivity and adding in a robot, the team was able to get production from 167 seconds down to 120 seconds, which solved the problem. Ultimate savings from the changes they suggested were $125,000 per year.

The second-place team from the WaveRunner molding department were looking to solve a problem of too much waste of the material. Originally, they had to cut two inches off each side of what they got, because it wasn’t usable. They reached out to the supplier of the compound to make sure they could get better quality material that didn’t have to be trimmed.

Once they fixed the trimmings, they reworked the patterns of the WaveRunner base to utilize that now usable part. They went from 85% usable material to 100% utilization. That’s better for the environment, it keeps over 557 tons of material out of landfills each year, and it saves the company $2.2 million dollars each year, according to Bob Jackson. He says, though, that winners are not necessarily chosen by the dollars of impact they create for the company, but for how well they follow and communicate Yamaha’s 8 Step Problem Solving Process when they make their presentation.

Mr. Kabir and Mr. Jackson both also shared that Yamaha has been bringing in other Yamaha subsidiaries from across the country to learn this process from them—they are sharing excellence from Newnan, Georgia across the nation.

Any employee can join a small group project and compete to win the prizes and respect of their management and peers. Yamaha is currently hiring additional employees for a growing team. To work for a team where your voice is heard and respected, and where you are paid at least $18 to start via contract, visit yamahajobs.com for details.